I can hear the call of the sea, I can feel it communicating to my soul !! Here I return back to the sea..

Far away in the amazing Arabian Sea is a solemn island of Elephanta . Don’t go by its name as it doesn’t harbour any elephants. But it did have an elephant shaped rock which greeted its first visitors and so it got christened as Elephanta. Elephants have a special significance in Hindu mythology. Ganesh, the elephant God is the first deity to be worshipped before beginning any enterprise . Whether it is a wedding, an examination, inaugration or any damn thing, He gets the first preference. It is an island guarded by the Elephant God himself !You cannot find the original Elephanta rock now as it has been placed in the Jijabai Zoo in Byculla, Mumbai. Concealed within this island are temples and caves. 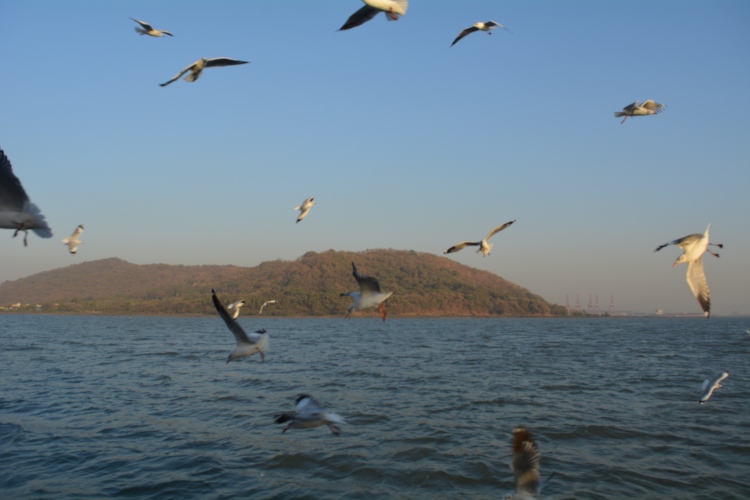 In this post I will sail you to Elephanta!

How to reach Elephanta Island?

Take a ferry ride from Gateway of India. Elephanta Island is just 10 km away from Mumbai . You can take a normal ferry or an air conditioned one. It doesn’t really matter. The surging waves will awaken you and you’ll be out of your seat enjoying the cool breeze. Click pictures ! Don’t feel shy in recording your memories ! It takes 60 minutes to reach the island so you’ll get a good taste of the sea. Its not like those journeys that end when you start enjoying. The journey to Elephanta fills you with joy and enthusiasm. It neither exhausts you nor do you feel dissatisfied, it satiates you.

Once you reach the island… 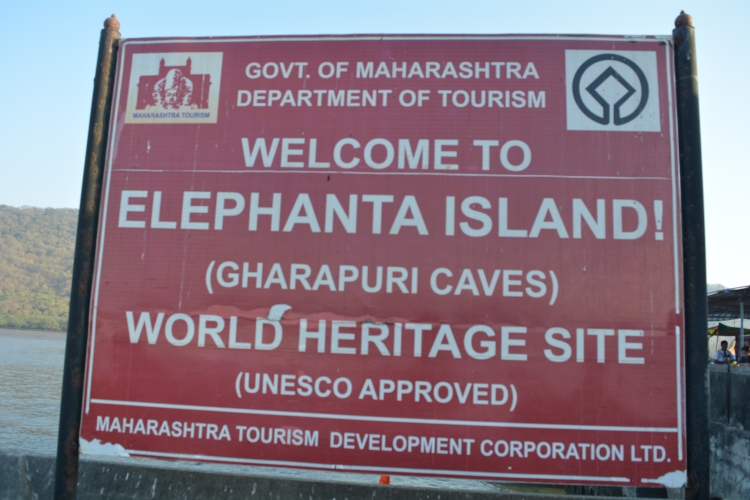 Its a 1 km walk from the harbour.

You can take a toy train ride or you can go on foot to reach the main island. Both the ferry and the toy train have a return ticket . You’ll be stuck in the island if you lose the return ticket ( just assuming ! )

Toy train to the main island

You will have to climb stairs . There are also arrangements for the people who have difficulty in climbing. 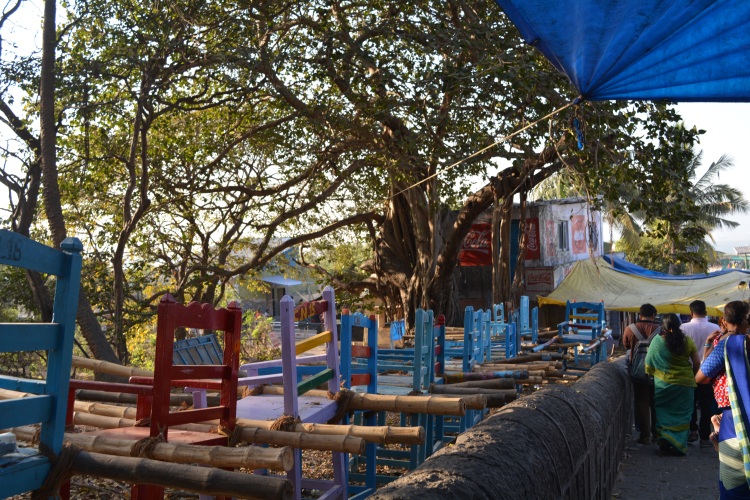 Provisions for the people who cannot climb the stairs

On the way to the caves..

You will forget that you are climbing as you will be distracted by the varied stuff that the local vendors will be selling. 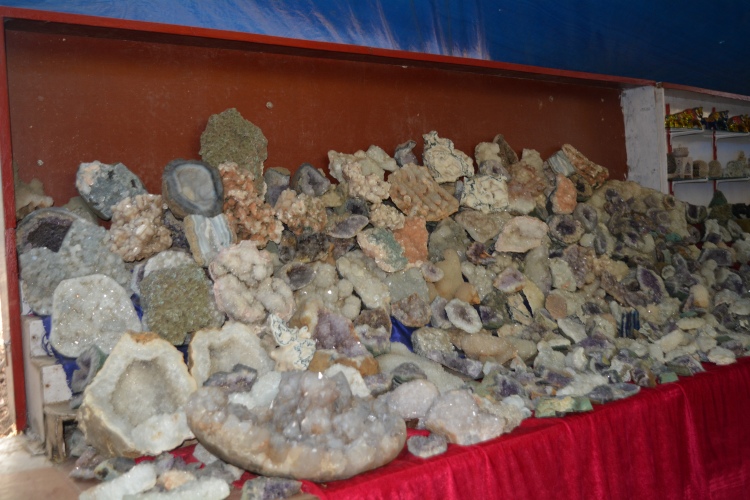 At the end of the stairs is the actual destination, the secret caves of Elephanta.

Elephanta has seven caves but the chief attractions lie in the first cave which has rock cut cave temple constructed between 5th and 6th century AD. The temple celebrates the Hindu God Shiv in its different forms. There is even a free of cost entry on the Hindu festival of Shivratri. As each sculpture has its own mythological story , you should hire a guide. Here I will briefly narrate to you some of the stories that I found interesting. 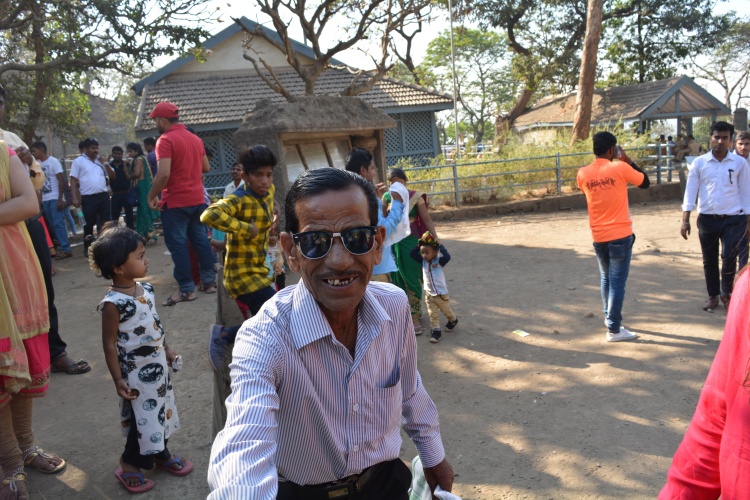 Our guide for the trip

This is the Trimurti Mahesh or the supreme form of Lord Shiv. This is the star attraction of the Elephanta caves. The height of the figure is 8.3m . The central face is the Tatpurush. This is the physical form of Lord. The face to the left represents Shiv as Rudra that is Aghor , the destroyer of the universe with a stern expression and a bulging third eye. The third face of the God is known as Vamdeva. 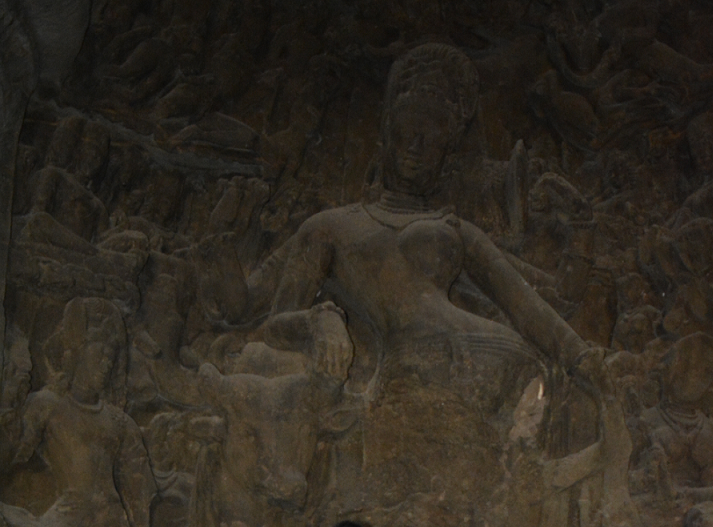 Shiv (left) and shakti (right). When Parvati got married to Shiv she asked Shiv to let her experience what he was and Shiv asked her to sit in his lap. Shiv shed a part of himself and included Parvati into it. This story is a symbolism of creation. There are two dimensions – Shiv (purush/man) and Shakti (prakriti/act) .Everything that is created is by the single act of Purush but what takes in the act and slowly evolves into life is nature which has been given a feminine form. No creation can occur without the harmony of both the forms.  We have within us both masculine and feminine energies, we can reach our full potential when both these energies our nurtured. 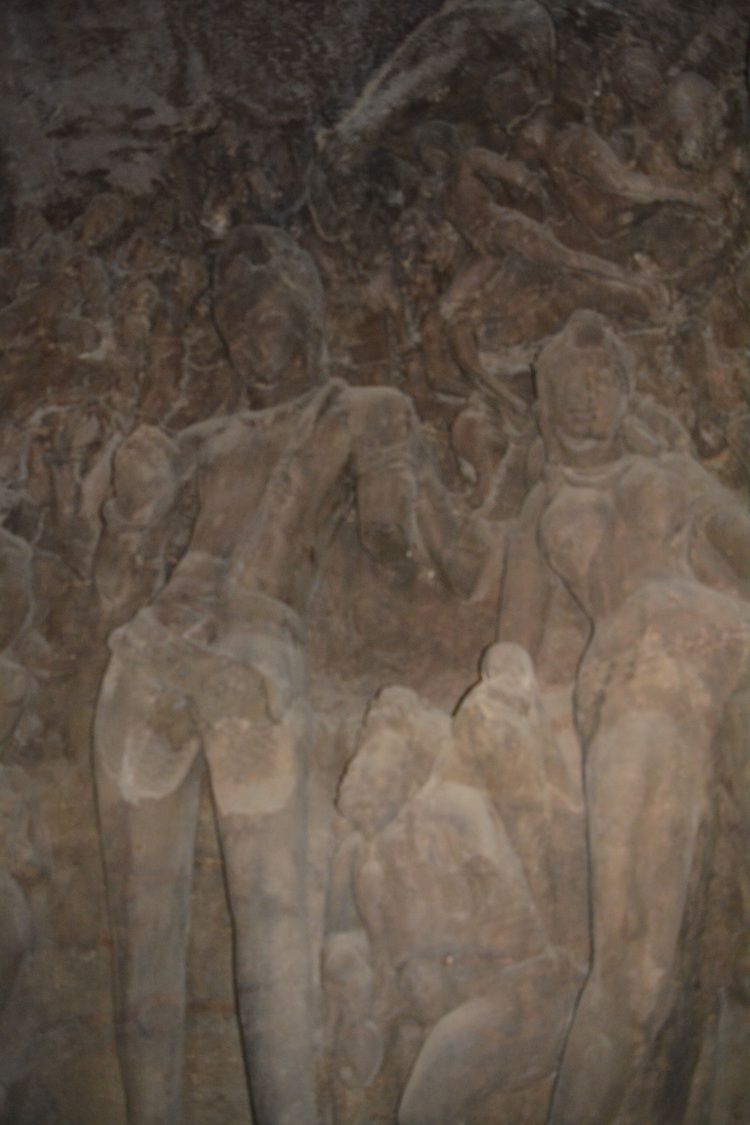 Shiv is also known as Gangadhar as he held the river Ganga in its matted locks. King Bhagirath could attain salvation only if Ganga descended from heaven onto the earth. Through his severe devotion he pleased Lord Brahma, the God of Creation who asked Ganga to descend from heaven to the earth . Ganga was furious , she decided to destroy the earth by her flow. Lord Shiv took her in her matted locks. Ganga realised that Shiv was no ordinary being so she calmed down. Sitting below Shiva’s feet is Bhagirath. Only a strong and calm mind , symbolised by Shiv can defeat arrogance, symbolised by Ganga.

Shiv as the Lord of Dance. Shiv performing Anand Tandava , the dance of bliss. 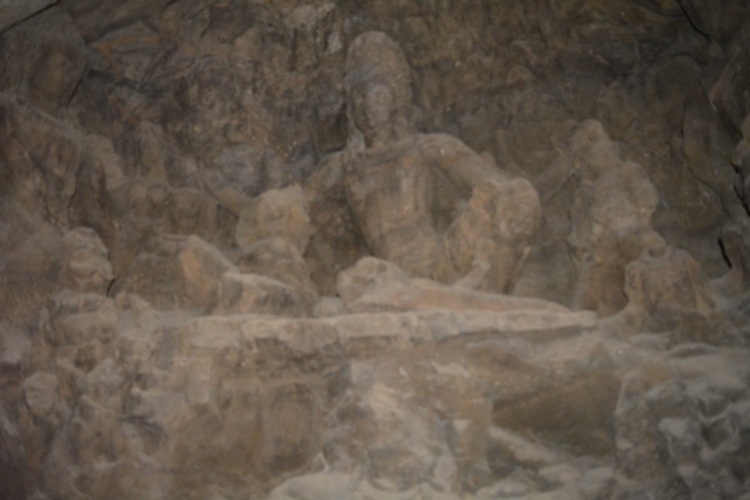 Ravana , a devotee of Shiv was trying to uproot Kailash, the abode of Shiv to carry it to his home. Lord Shiva knew pressed the thumb of his left foot that not only settled the Mountain in its place but also suppressed arrogant Ravana. Realising his error Ravana cried for mercy andforgiveness which the lord granted.

These are some of the few sculptures. Please forgive me for my amateur photography. The original caves are far more beautiful than the pictures that I have put.

Tips for the trip

This was just a brief acquaintance.I hope you will take this journey and come home to Elephanta !

I took this trip twice with family members and friends.

This site uses Akismet to reduce spam. Learn how your comment data is processed.